Lumpini Park is the first public park in Bangkok, given for community use by His Majesty the King Rama VI in the royal occasion of his 15th anniversary of accession to the throne in 1925.  His Majesty's contemplation was to provide a park with various types of plants and trees for his people to relax in and gain knowledge of.  The name 'Lumpini', given by His Majesty, was taken from the Lumpiniwan District in Nepal, the birthplace of Buddha.

Later, during His Majesty the King Rama VII's sovereignty, ninety Rai of the southern part of the park was leased to build 'Wanaremgrom' enjoyment park to raise funds for Lumpini Park's restoration.  His Majesty explicitly ordered the government to maintain its condition and only use it for public purposes.

Visitors to the park can enjoy a wide range of recreational activities.  People can be found routinely jogging, doing aerobics, tai chi, fencing, yoga, or other activities.  There are also paddle boats available to go out on the water where one can go down the water banks to watch the monitor lizards.


A map of the part is provided below.  There are ample paths for the public to use within the park free of any motorized traffic.  Centers are located within the park for both the elderly and youth to enjoy.  There are several pavilions around the park where a variety of leisure activities can be found.  The park also hosts a public library, food course, swimming pool, outdoor gym, school, radio station, playground, tennis court, basketball court, and restrooms. Multiple entry points exists from all sides of the park. 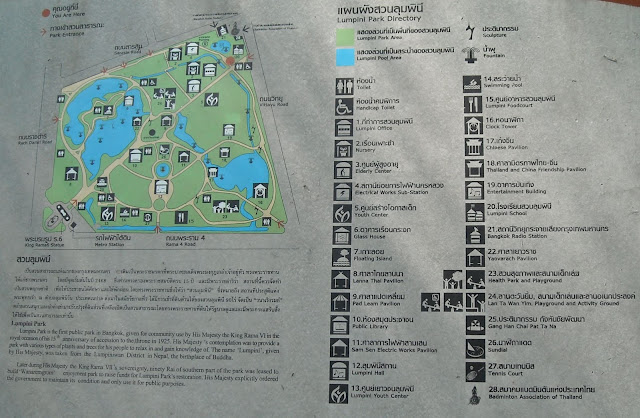 Frosty
Open the right-side calendar indexes to see the various topics which are covered. Topics are updated often even though they may have been created a long time ago.